Climate action is one of FinDev Canada’s three development impact goals and plays a key role in the realization of our mandate. We recognize that climate change is a global systemic issue that disproportionately affects developing countries, especially women and other vulnerable populations. Climate action must be scaled to achieve the objectives of the Paris Agreement and limit global warming to 1.5°C above preindustrial levels.

FinDev Canada launched its Climate Change Strategy in 2021, which articulates how our Climate Change Policy is implemented across our activities. Our strategy is structured around three strategic considerations. First, as a gender lens investor, we promote both gender and climate action throughout our investment process, including sourcing, due diligence, decision-making and post-investment support. Second, we will continue building a low-carbon portfolio in line with the objectives of the Paris Agreement of reaching net-zero emissions. Third, we are committed to enabling climate adaptation and resilience as our target regions are amongst the most vulnerable to climate change.

We are operationalizing our climate change strategy through four priorities for action, which encompass portfolio-level and institutional-level initiatives: 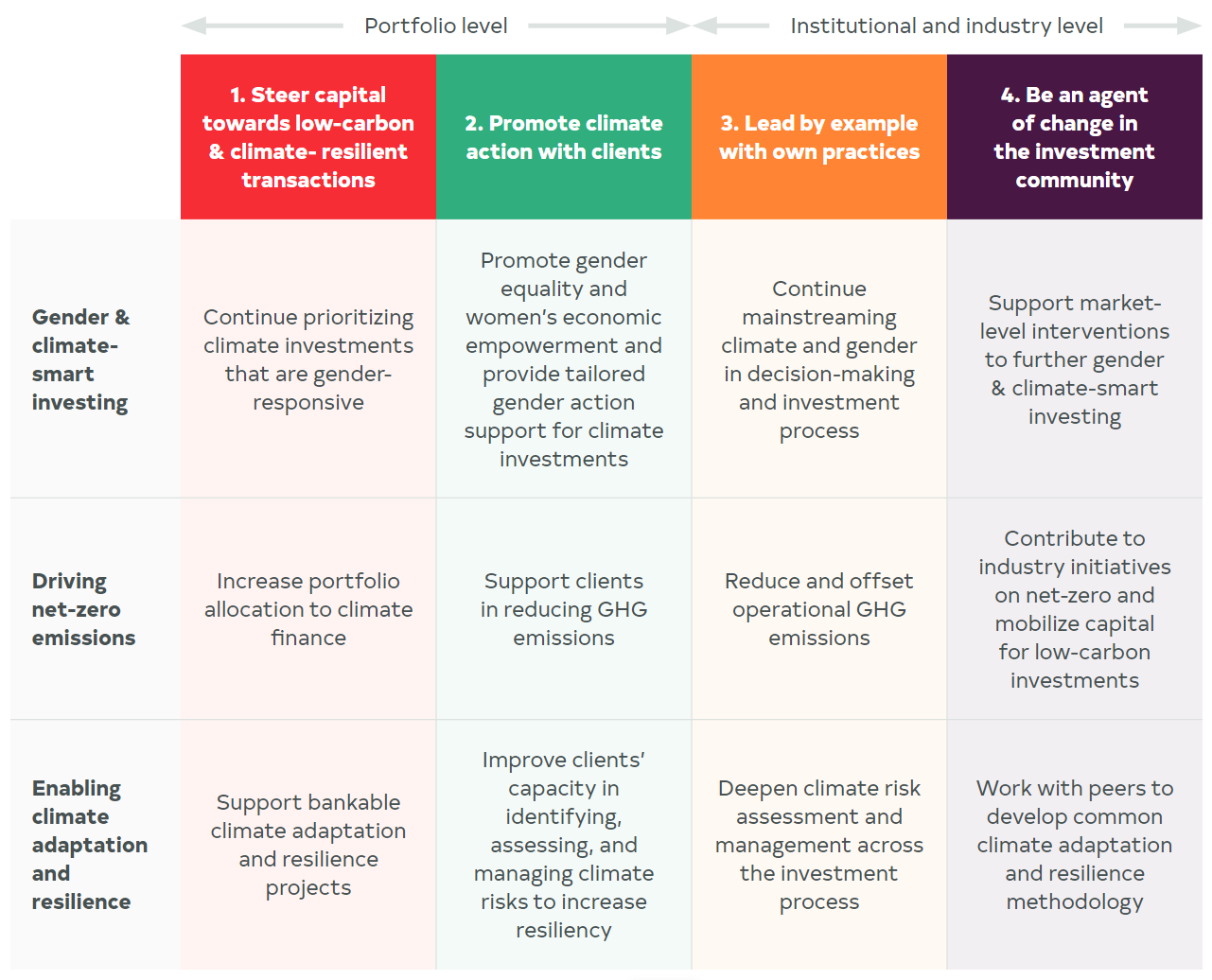 FinDev Canada has built a portfolio with net-negative greenhouse gas emissions for both annual GHG emissions from our 2020 portfolio and cumulative GHG emissions since inception in 2018. In other words, since FinDev Canada’s inception, our investments and loans have contributed to more carbon removal from the atmosphere than generated GHG emissions. The three main factors supporting this are:

Our net-negative portfolio includes emissions from the real economy only, namely generated greenhouse gases and carbon removal. We also measure the avoided emissions of our investments in renewable energy projects, which represent emissions that would have occurred without the implementation of the projects. Although avoided emissions represent a quantifiable positive contribution to decarbonization, they are calculated and reported separately from the net-negative framework, in line with international best practices.

FinDev Canada measures the generated, sequestered and avoided GHG emissions of every new investment and monitors these emissions at least annually during the investment period. The financed, generated and sequestered emissions [i] for the year ended December 31, 2020, based on our attribution as at the same date, were assured to a limited level by an independent 3rd party. 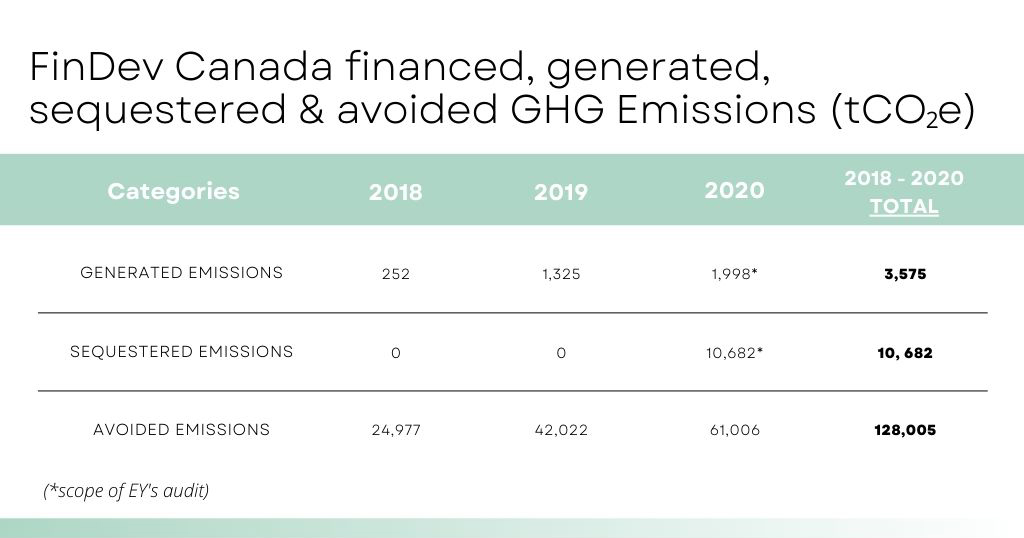 Generated emissions include scope 1 and scope 2 GHG emissions associated with our loans and investments and are calculated using:

These emissions are attributed to FinDev Canada based on our proportion of financing and cover 100% of our loans and investments. In terms of GHG data, 60% of emissions were reported by our investees in 2020 and 40% were estimated using the Joint Impact Model [ii], for a combined PCAF weighted data quality score of 2.9 out of 5.

This policy establishes a set of overarching principles for FinDev Canada to integrate and promote climate action throughout its investments and operations. The operationalization and implementation of this policy will be the subject of FinDev Canada’s climate change strategy.

On March 22, 2021, FinDev Canada joined more than 100 leading financial institutions that are already part of PCAF and committed to measure and disclose the GHG emissions associated with our loans and investments.

How does net-negative compare to net-zero commitments by 2050 made by most organizations?

Most organizations have a historical net-positive balance of greenhouse gas emissions, meaning that they contribute to the generation of more GHG emissions than they remove. As such, their goal is to reduce emissions to reach net-zero. As a young DFI launched in 2018, FinDev Canada’s GHG emissions baseline is lower and the attributed sequestered emissions from our forestry investments are higher than the combined generated emissions from all our investments and loans.

What are generated emissions?

How are generated emissions measured?

The Partnership for Carbon Accounting Financials (PCAF) is a global partnership of financial institutions that work together to develop and implement a harmonized approach to assess and disclose the GHG emissions associated with their loans and investments. PCAF’s Global GHG Accounting and Reporting Standard for the Financial Industry is becoming the global reference for measuring financed GHG emissions, and was endorsed by the GHG Protocol and the TCFD. The PCAF standard enables financial institutions to report on emissions transparently and on a comparable basis, which is critical to scale sustainable finance.

What are sequestered emissions?

What are avoided emissions?

Avoided emissions are GHG emissions that would have occurred without the implementation of a renewable energy or energy efficiency project. Although they represent a quantifiable positive contribution to decarbonization, they are calculated and reported separately from the net-zero framework.

How are carbon offsets treated?