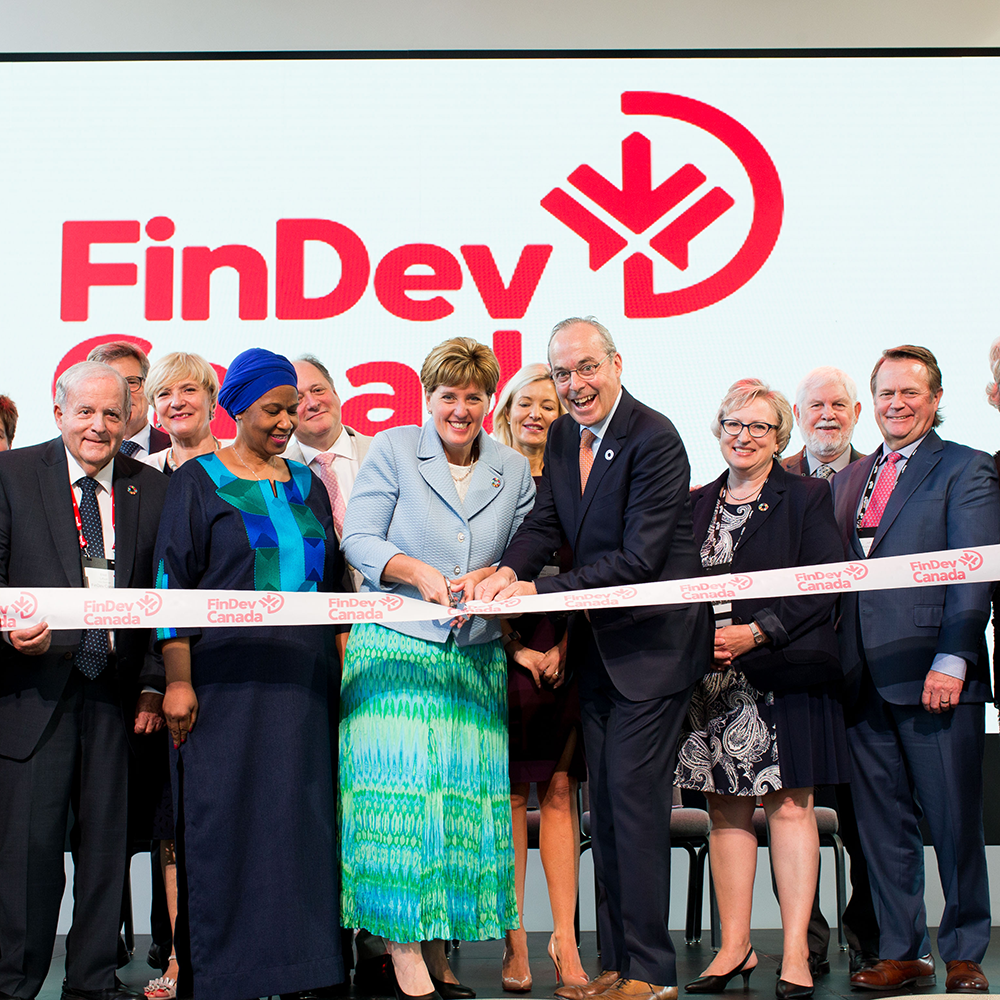 (Montreal, September 17, 2018): Launched nine months ago by the Government of Canada, FinDev Canada, the country’s Development Finance Institute (DFI) celebrated the opening of its Head Office by hosting an international conference entitled, “What could women do with $3 billion? Change the World.” The title refers to the leadership role Canada played at the G7 meeting where FinDev Canada joined with other DFIs in supporting the 2X Challenge, jointly committing to raise $3 billion dollars to be invested in initiatives that advance women as entrepreneurs, business leaders, employees and consumers.

In inaugurating the offices, the Honourable Marie-Claude Bibeau, Minister of International Development, noted, “With its universities, international organizations and multicultural population, Montreal is the ideal home for FinDev Canada.  From its Montreal base I am confident it will play a critical role in advancing our country’s international development agenda by offering a blend of public and private capital and building partnerships with businesses in developing countries, especially those operated by women and youth.”

Drawing upon a range of financing instruments including loans, equity investments and bank guarantees FinDev Canada will serve as a catalyst for private sector investment in developing countries in order to combat poverty through economic growth.
“The on-the-ground reality in the developing world,” explained Paul Lamontagne, FinDev Canada’s Managing Director, “is that entrepreneurs are often seen as too risky by many international financial institutions, and even local banks have a limited appetite for supporting them. There is a serious financing gap in developing countries, particularly in the poorest ones, and Canada, through FinDev Canada, is taking a step forward to help bridge this chasm. In so doing we will focus on job creation, women’s economic empowerment and climate action.

“Study after study,” he continued, “has repeatedly demonstrated that women are key drivers to achieving economic prosperity and global stability. Yet, the fact remains that about 150 countries have at least one law on the books impeding women’s economic advancement. In 100 economies, women face gender-based employment restrictions. In many countries women can’t start a company, sign contracts, or even open a bank account. As one of the world’s most prosperous countries and a leader in economic and social development initiatives, Canada has an important role to play to promote and to enhance women’s economic opportunities around the globe.”

Phumzile Mlambo-Ngcuka, Executive Director of UN Women, praised the launch of FinDev Canada; “This is a vital step to empower women entrepreneurs. It underlines how a strategy with a strong gender lens can increase women’s access to economic opportunities.  To take just one example, investments in women's businesses that provide power can have a dramatic life-changing effect by reducing the time women and girls in poor households spend collecting fuel for cooking and heating.  Women’s enterprises specializing in decentralized, sustainable energy technology and infrastructure could bring energy to more than 1 billion people currently without access. Scale up similarly well focused investments, and we will see a step change in the benefits being brought to communities- and economies as a whole.”

Since Mr. Lamontagne’s appointment in January, FinDev Canada has set up an Advisory Council comprised of experts in international development and business. It has also made a US $10 million investment in M-KOPA, a leading ‘pay-as-you-go’ energy provider which will help bring solar power to a million more low-income African homes.

In noting that FinDev Canada is a wholly-owned subsidiary of EDC, Benoit Daignault, Chair of FinDev Canada and President and CEO of EDC, explained, “We are pleased that the Government of Canada turned to EDC, asking us to be the home of the country’s DFI. With close to 75 years of experience helping Canadian companies respond to international business opportunities, we are serving as a resource, offering expertise in global markets, particularly emerging markets, financing and private sector relationships. For us, FinDev Canada represents an exciting opportunity to bring about lasting economic and social change.”