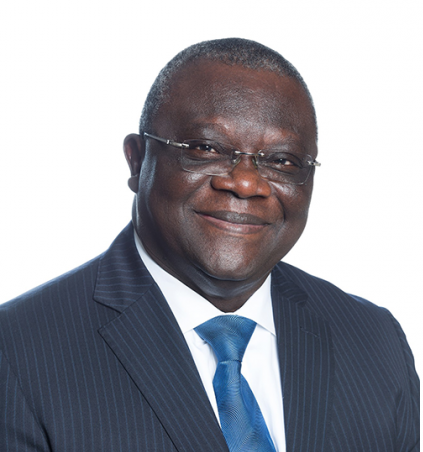 Albert Essien provides Consultancy and Advisory work to business especially in banking and finance. Currently, he is the Director on the Board of Old Mutual Ltd in South Africa.  Mr Essien is the Chairman for the Endowment Fund of the College of Physicians and Surgeons Ghana, and the Ghana Stock Exchange . He did serve as a Senior External Advisor for Mckinsey & Co.  In a career spanning more than 20 years, Mr. Essien has held a number of key appointments in the Ecobank Group, including Regional Head for the Rest of Anglophone West Africa (including Guinea Conakry but excluding Nigeria) and the Eastern and Southern Africa (ESA) regions. He joined the Corporate Banking Department of Ecobank Ghana in 1990 where he held many positions including Deputy Managing Director (2001), Managing Director (2002). He spearheaded Ecobank’s expansion into the Eastern and Southern (ESA ) region, culminating in the establishment of subsidiaries in 7 countries (Kenya, Uganda, Tanzania, Rwanda, Burundi, Zambia, and Malawi) and a Representative Office in South Africa. He assumed the role of the Group Chief Executive Officer in March 2014.  Albert Essien has a degree in Economics from the University of Ghana (graduating in 1979) and is an alumnus of the Executive Development Program of INSEAD (France/Singapore). He is also an honorary fellow of the Chartered Institute of Bankers, Ghana. Albert Essien won ‘African Banker of the Year’ at the 9th African Banker Awards in May 2015, in recognition of his contribution to best practices in African banking. Mr Essien was awarded the Chartered Institute of Marketing ‘Marketing Man of the Year’ 2005 and  “Lifetime Achievement Award" at the Ghana Banking Award in 2015. He is a World Fellow of the Duke of Edinburgh International Award Foundation.